“Diedre Irons’ magical lightness of touch in the coda of the Intermezzo was simply breathtaking”
– (Tony Ryan, Christchurch) String Quartet No 5 in Bb

Quintet for Strings and Piano

The New Zealand String Quartet is surely a national treasure. Celebrating their 35th year in 2022, they have built a world-wide reputation. Their contribution to the New Zealand music scene is immense. As well as performing they teach at the New Zealand School of Music, where they have been Quartet-in-Residence since 1991. Over the years they have promoted the music of New Zealand composers and have commissioned over 150 works. They mentor young chamber musicians through numerous events such as the annual Adam Chamber Music School.

Their wide-ranging programme opens with Haydn’s famous “Emperor Quartet” followed in total contrast by Shostakovich’s 5th Quartet. Frequently dark and dramatic, this work was written in 1952 but Shostakovich wisely held it back from publication until the darkest oppressive days of the Soviet regime had passed.

Members of the New Zealand String Quartet enjoy collaborating with other performers, one of whom is popular pianist Diedre Irons. Together they will perform a piano quintet by Amy Beach, a composer and pianist born in 1867 and considered to be one of the finest American composers of her time. Composed in 1907 this very attractive quintet is in late Romantic style.

“Balzat and Matheson lost no expressive opportunity in a performance that was deeply satisfying” – (Jo St Leon, Hobart) 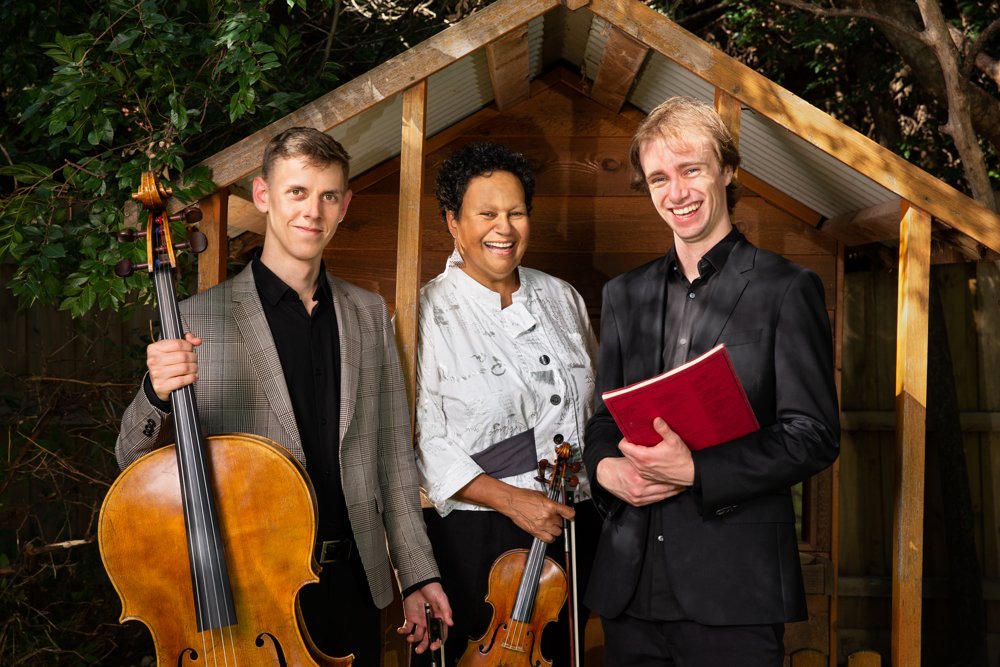 Piano Trio in E minor, Op 90 (“Dumky”)
In 2020 Wilma Smith was excited about introducing us to her new Argyle Trio with its outstanding young musicians, Laurence Matheson and Matthias Balzat. However, Covid border restrictions kept Laurence out of the country. Michael Houstoun kindly stepped in to enable the tour to proceed – a very satisfactory substitute indeed! Nevertheless, we hope that this time we will finally hear the original combination.

The programme opens with one of Beethoven’s earliest chamber works, written when he first moved to Vienna hoping to make an impression on the city’s musical elite.

The trio by Smetana was written for a very different reason. Following the death of his infant daughter in 1855, Smetana immediately began writing this piano trio, dedicating it “in memory of our eldest child Bedřiška, whose rare musical talent gave us such delight”. There is no mistaking the serious mood of this work. All three movements are in G minor, and even the major sections do little to change the sombre mood.

In contrast, Dvorak’s “Dumky” Trio has a constant mix of emotions in its six movements. “Dumka” means “a fleeting thought” and the music constantly fluctuates between brooding melancholy and sharply contrasting interludes of lively dance-like exuberance. A concert packed with abundant colour, variety and some of the world’s greatest music – all six of Bach’s legendary Brandburg Concertos. This is a very special occasion. The opportunity to hear all six of Bach’s legendary Brandenburg Concertos in one concert is very rare. Donald Armstrong’s Amici Ensemble have brought us some remarkable concerts over the years, but this surpasses them all.

Twenty musicians, mostly NZSO players plus other top New Zealand artists, will gather to bring us this amazing music.

The concertos are in the front rank of the masterpieces of Western music and are Bach’s best-known and most often performed works. Bach brings together the widest possible combination of instruments, with different soloists for each concerto, combining them in daring partnerships with a wide range of moods and structures, frequently demanding virtuoso performances from the soloists.

Concerto No 1 has several solo instruments with the two horns taking much of the limelight.  The second concerto features an extremely high trumpet part as well as solos for flute, oboe and violin.  No 3 has three each of violins, violas, and cellos.

Soloists in the fourth concerto include two flutes and a violin.  Flute, violin and harpsichord star in the fifth concerto.  No 6, the only one with no violins, focuses on the lower strings and harpsichord.

The Concertos will not necessarily be played in this order.

“I have taken the liberty of rendering my most humble duty to Your Royal Highness with the present Concertos, which I have adapted to several instruments; begging Your Highness most humbly not to judge their imperfection” – from Bach’s letter to the Margrave of Brandenburg-Schwedt

Please note: This concert will be longer than normal and is unlikely to finish before 4.30pm.

“he has contributed substantially to raising the standard of expectations for classical performance, and helped to establish an international standard of musical excellence in New Zealand”… (on receiving an Honorary Doctorate from Victoria University) Variations and Fugue on a Theme by Handel, Opus 24

It is with great pleasure that we once again welcome Michael Houstoun to our stage.

As usual he has selected a stunning programme for our delight, opening according to his custom with the music of J S Bach. The seven Toccatas for Keyboard (BWV 910–916) are not well-known so it is special to have the opportunity to hear one of them.

It is followed by Brahms’s Variations and Fugue on a Theme by Handel, one of the summits of Brahms’s entire keyboard output. Handel’s famous theme is transformed as we are swept through an amazing journey of twenty-five wildly contrasted variations culminating in an exhilarating fugue.

The second part of the programme opens with Chopin’s exquisitely delicate Berceuse and the graceful Impromptu in F#, preparing us for the tantalising selection of Rachmaninoff Preludes and Etudes-tableaux that follow.

Rachmaninoff is possibly the greatest piano composer of the 20th Century and these richly evocative works, written quite early in the composer’s life, are colourful tone-paintings filled with emotional poetry, romantic beauty, tragedy, darkness and light.